Spontaneous infections of the spine are caused by bacteria circulating in the blood or scattering from the oral area, respiratory tract, urine and intestines as well as the skin. Hence they are most commonly caused by the usual germs, that humans carry within them. Tuberculosis of the spine has become very rare.

Postoperative infections however, are caused by so-called hospital germs, which are more difficult to treat.

In a spontaneous infection (spondylitis, spondylodiscitis), the patient suffers from increasing pain in the affected area of the spine and reports nausea, fever, chills and loss of weight. Seniors are more likely to be affected, as well as patients with multiple diseases, e.g.immunosuppression and diabetes mellitus.

The pathogen is verified in the blood using blood cultures or directly at the affected area by taking a biopsy. After verification of the pathogen, an intensive antibiotic therapy is performed.

Surgery of a spondylodiscitis includes the eradication of the abscess, decompressing the spinal canal and stabilising the spine with implants.

In a postoperative infection, the site of the operation has to be reopened, drained and cleaned. Whether the implants have to be removed or newly placed has to be decided individually. After verification of the pathogen, an intensive antibiotic therapy is performed. 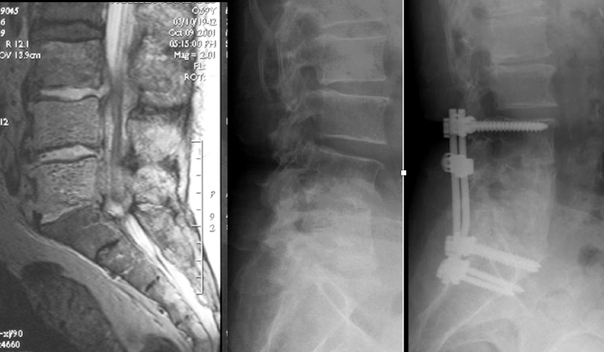 Example 1: Spontaneous infection of the three lowest intervertebral discs of the lumbar spine, causing instability and kyphosis. Eradication of the abscess and stabilisation using screws and rods 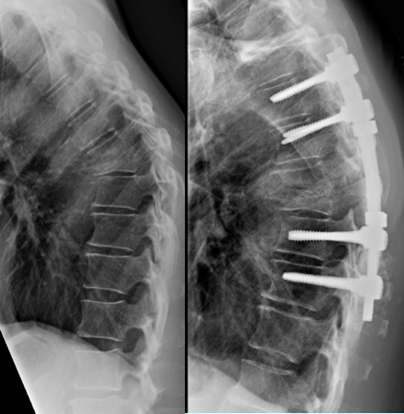 Example 2: Eradication of an abscess in an intervertebral disc of the thoracic spine. Stabilisation using screws and rods

Example 3: Eradication of an abscess in an intervertebral disc of the cervical spine with fixation