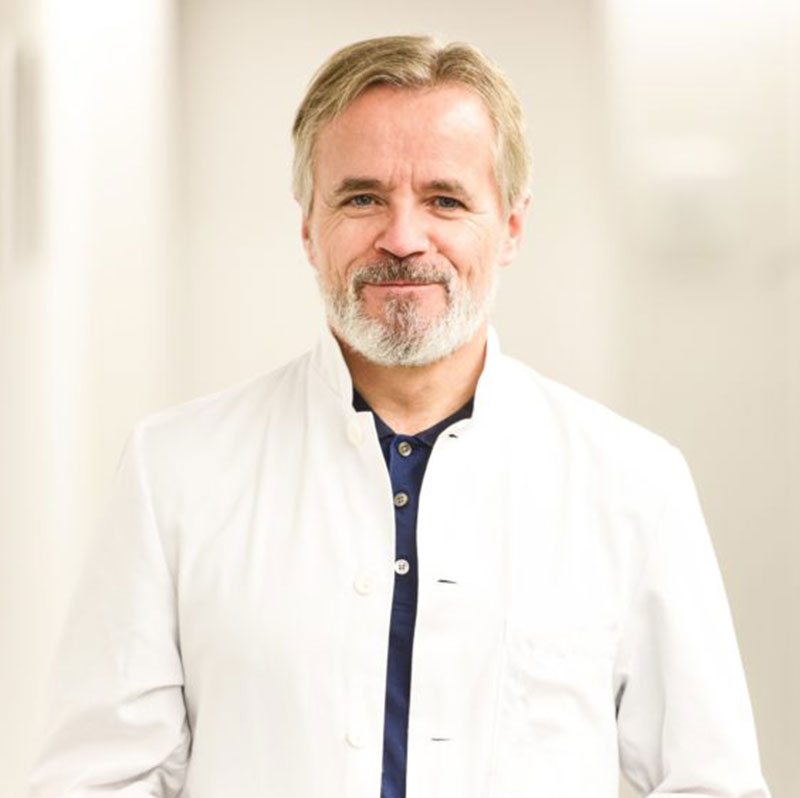 Personally performed operations (as of 2019)

The Aorta is the largest blood vessel in the human body. It originates in the left heart chamber, then moves in an arc to the abdominal area. Above the diaphragm, it is called thoracic aorta (Aorta thoracalis), below it abdominal aorta (Aorta abdominalis). The thoracic aorta has an ascending part (Aorta ascendens) and a descending part (Aorta descendens). This is an important distinction, since the localisation of the disease is crucial to the therapy chosen. The most common disease of the aorta is a weakening of the elastic tissue of the vessel wall., leading to a widening (aneurysm) of the aorta. An aortic aneurysm can occur in all parts of the vessel and sometimes includes other structures, such as the aortic valve. It poses the danger of both an internal (dissection) or an external (rupture) cleft in the aorta, which can lead to serious and live-threatening haemorrhages.

In 80 percent of aortic aneurysm cases (both thoracic and abdominal), a minimally invasive procedure called the endovascular Stentgraft-Implantation can be carried out as an alternative to the conventional open surgery. Using spinal or local anaesthesia in the groin region, the femoral arteries are punctured and exposed. By means of an infeed sluice, the compact and covered prothesis parts (Nitinol-Stent with sewn-in Dacron or PTFE-coating) can be pushed through the pelvic arteries into the aorta. Correct positioning is controlled by a screening, the prothesis is released by carefully removing its cover. From this moment on, the aneurysm is excluded from blood circulation. The blood flows through the implanted Y-shaped prothesis into the pelvic arteries.

With decent diagnosis, the immediate success rate of the operation is between 95 and 100 percent. To perform a Stentgraft-Implantation, certain conditions need to be considered:

Both the mortality and the morbidity of the procedure are significantly lower compared to conventional surgery (graft substitute of the aorta), with a much shorter duration of hospitalisation. On the other hand, between 10 and 20 percent of patients may need additional surgery in the medium or long term (mostly because of a renewed perfusion into the aneurysm sack). However, these numbers should be treated with care, since a lot of participating cardiac centres use different prothesis models and the method is continuously improved. At HerzZentrum, we use the endovascular method since 1998 and have implanted over 220 stentgrafts with a primary success rate of 99,6 percent. Die hospital mortality is at 0,4 percent and the average duration of hospitalisation after surgery amounts to 2,4 days. In the follow-ups, only one rupture has appeared and 12 re-interventions were needed (of which 2 were conventional graft replacements). All patients receive follow-up checks on a regular basis.

The diagnosis for an endovascular intervention should be made very carefully and in an interdisciplinary team. Only with meticulous planning (especially concerning patient selection, choice of prothesis and dimensions of the graft) can these results be achieved in the long term.

*One percent of humans are born with a heart condition, which is often dealt with right after birth. Many patients however – be it in childhood or as an adult – are in need of an additional operation. Furthermore adults, who have been successfully treated early in their lives, can develop the same conditions as any other adult later on. They may need surgery of the valves, aorta or a bypass operation, which can become quite sophisticated because of the earlier intervention.